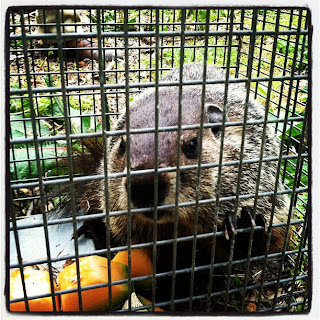 Well, after unwittingly catching a squirrel and making a trip to the market for a cantaloupe, I got him. Poor guy. He was so scared.  I just have to keep reminding myself that he and I are simply competing for resources, and my half acre can't sustain us both. I told myself that he is way more adaptable than I, and that he should get along just fine in his new habitat. I also told myself that he is a he, lest I start worrying about unfed babies waiting for their mother back in the hole (thanks, Amber). So he's off on a new adventure in Fairmount Park. Across the great Schuylkill River.
The next order of business will be getting that wood pile cut up and stacked elsewhere. That'll do the trick I'm sure.
Posted by Amanda at 1:27 PM No comments:

Email ThisBlogThis!Share to TwitterShare to FacebookShare to Pinterest
Groundhog Day 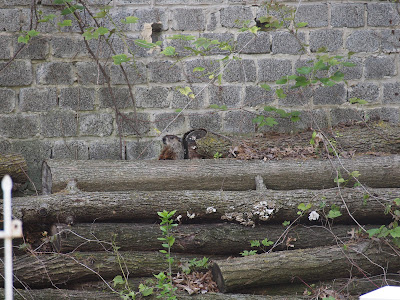 It's finally happened. One of the hundreds of groundhogs in my neighborhood has taken up residence in the garden. We had a scare once before, the first year we were here, when the snow was just melting and a little guy awoke to find that the forest he'd fallen asleep in had become a field overnight. We cornered him under a giant tank, threw a sheet over him, sent the dog after him, stepped on him, grabbed him by the scruff of his neck, threw him in a cage, and he still got away. He never did come back, though. That was four years ago, nearly. This one seems pretty content. Pretty settled in. Pretty hungry.
If I were around everyday like I used to be, I would be less concerned. As I worked out there yesterday, he kept his distance, scrounging around the grassy area behind the beehives, keeping his eye on me. Every time I made a move he'd scurry back into his pile. He'd peek out like this to see if the coast was clear, then duck back down again. So he didn't get very far. Since I work away from home two days a week now, though, I am nervous. Nervous for my beautiful bibb lettuce, the succulent peas, the baby cabbage, the edible flowers. What kind of damage will he do once he feels no threat? Once I am gone? For ten hours. Oh, my.
I have a cage set up- a real one this time, a trap. I put apples in it, but I hear they really go for melons. Since he watched me put it there, I doubt that he'll be all that enticed to go in. The only other thing I can think of is adopting him as my pet. Look at him looking at me. He's so suspicious. He'll never consent to that. Maybe if I had a melon.
Posted by Amanda at 4:44 AM 2 comments: 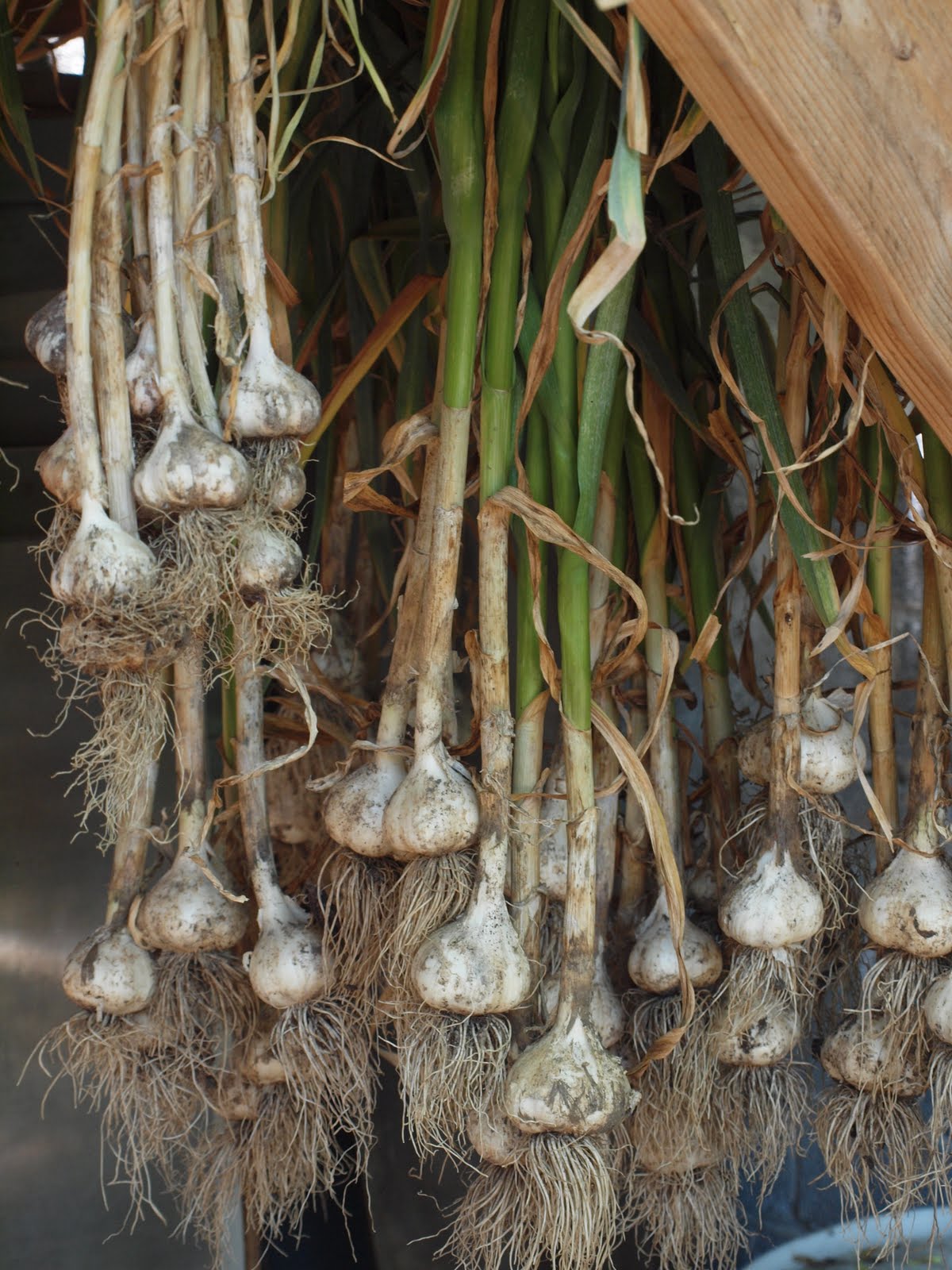 I just tossed the last of our garlic into a pot of soup. From now until July I'll be buying the Chilean or Californian stuff at the grocery store like the rest of you suckers. Anticipation of this fact had me planting an extra bed of garlic this fall. And why not? It's the perfect crop, in some ways: plant it in the fall, mulch it, do nothing else until it's time to pull it up midsummer, at which point you have an empty bed for planting your fall cabbage or what have you. Plus, it's the second most popular item at the stand behind honey. Unlike the honey, it is not much of a moneymaker (I charge 50 cents a head for the larger heads or 3 for a dollar if they're smaller), but people are really impressed with fresh garlic. It's like magic to them ("You grew this?"), and I think it gets them excited about cooking the various other vegetables on display. So I think it's a win. If nothing else, hundreds of garlic plants hanging from the rafters of the patio roof makes me feel like I have a totally legitimate operation going. Sometimes I'll just take a walk back and admire them hanging there. And then there's the potential for my personal supply to last until the next harvest, and that is an                                                                 exciting prospect indeed.
Posted by Amanda at 6:31 AM 2 comments: